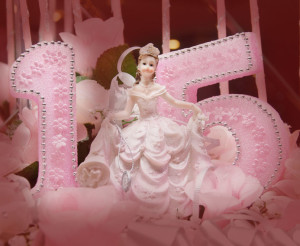 Every Quinceanera celebration has an unforgettable story that remains with the family and guests forever. Of course, the family hosting the Quince party hopes only beautiful and glamorous memories will remain with their guests. They may envision memories of dancing late into the night under beautiful lighting and amazing music.

It is important to remember that it is impossible to control every single aspect of the Quinceanera party, because often times things happen that are out of our control. Sometimes if the planning was done in a more organized fashion, mistakes are easier to avoid. In this article we have compiled a list of the good and bad stories of different Quinceanera celebrations. Upon reading each story, it may be obvious how the situation could have been avoided had there been better planning. Some of these stories focus on the beauty of the rite of passage celebration and the true meaning of the Quinceanera tradition in the latino community.

A Corte de Honor (Court of Honor) represented by 13 Chambelanes, 14 Damas, and the Quinceañera’s escort were performing the waltz dance which has been performed for centuries. However, one of the Chambelanes sneaked an alcoholic drink before the dance and passed out in the men’s room! He missed the Corte de Honor’s performance.

One of the Chambelanes tuxedos ripped at the seam, and the mother of the Quinceanera was not able to fix it because she didn’t have safety pins or a needle and thread to fix it.

The person designated to pick up the special Quince cake for the Quinceañera’s reception party forgot to pick it up at the bakery, so there was no cake during the reception. By the time someone realized that the cake was missing, the bakery had closed and never called the family to pick it up.

The photographer did not know the time and place of the Quinceanera ceremony which takes place at a church. Unfortunately, by the time he arrived the ceremony was already over and no pictures were taken.

There was a special event on the day of the Quinceañera, and the streets surrounding the church where the ceremony took place were closed off. The commute from the church to the banquet hall should have taken less than 15 minutes, but took almost an hour! The whole party ended up getting to the reception hall with a police escort.

At a smaller Quinceanera celebration held at the home of the Quinceañera’s family, a group of party crashers disrupted the party. The Quinceañera’s father told the crashers to leave, but they did not listen. Everyone was upset and afraid, and just as someone was going to call the police, they left.

The Court of Honor was dressed in synchronizing outfits, with green dresses for the Damas and green ties/black suits for the Chambelanes. Just before a photo was taken of the Corte de Honor, one of the Chambelanes spilled champagne all over his green tie, and there was no extra tie to wear temporarily for the photo.

The Quinceanera gave a special speech dedicated to her mother and father during the church ceremony. The parents were so moved with emotion from her beautiful words that they wiped away tears of joy. It was a special moment that no one would forget, as they saw their girl transition into womanhood with such elegance and grace.

As the Quinceanera celebration continued through the night, the Quinceañera’s feet were getting tired from her high-heel shoes. She was in a lot of pain and decided to take her shoes off, but had completely forgotten to take an extra pair of comfortable shoes to change into! In the pictures of the celebration that followed, the Quinceañera’s feet can been seen barefoot while she is dancing, which she regretted later.

Good planning, organization, and preparation are essential when it comes to everything running smoothly and according to plan. Avoid mishaps from happening by planning ahead and remembering items that would go under a “just in case” pile. This will ensure that the Quinceañera, her family, and all of the guests will have an amazing time while creating beautiful memories that will be remembered forever!